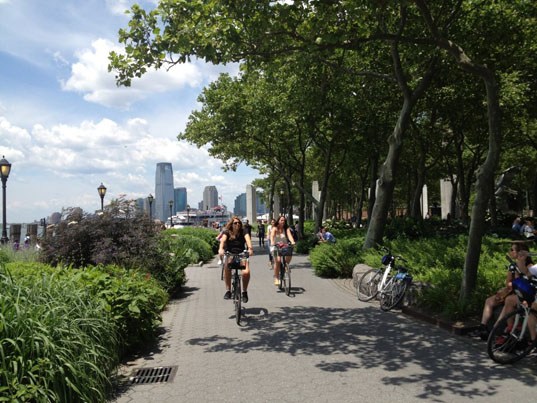 Another one of my favorite parks in Manhattan is Battery Park. Situated at the southernmost tip of the island, it’s like a lush green oasis that suddenly emerges where the concrete jungle of the Financial District ends.

The park has been a place of enjoyment for New York citizens for quite some time, but it didn’t start out as a place for relaxation. Its name derives from the area’s initial usage as an artillery battery – one of the main points of defense for the island of Manhattan. The park as we know it did not begin to come about until the 19th century when a landfill was created in order to develop the park. And here’s a little-known fact – Castle Clinton, located in Battery Park itself, was the city’s first immigration depot. It’s still a place of significance to this day, serving as the departure point for ferries heading to Ellis Island and Liberty Island, boasting millions of visitors per year.

And if you’re interested in even more NYC parks history, check out this post about Central Park designer, Calvert Vaux .

And you can also check out this post about Father Demo Square.