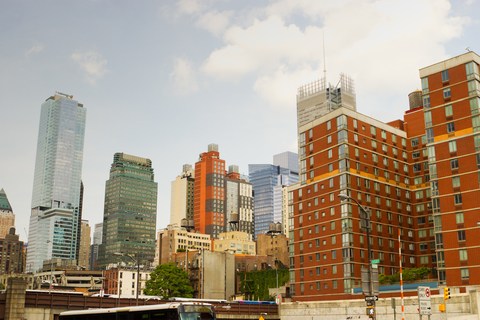 What I Like Most About It: Similar to its sister neighborhood across the way, Midtown West brings to mind images of massive skyscrapers and bustling sidewalks. But Midtown West is also home to Times Square and the eponymous Broadway, conjuring thoughts of bright lights, tourists and a multitude of entertainment options. But go west of 8th Avenue, and you’ll find yourself in a very different place – a highly residential area, with an interesting mix of brand new buildings, pre-war walk-ups, post-war mid-rises and townhouses. There’s an incredible selection of bars and restaurants, especially along 9th Avenue and, increasingly, 10th Avenue. Few places in the city have the kind of transportation options the area has – between 6th and 8th Avenue there’s access to 13 subway lines, including major transit hubs such as Port Authority, Penn Station and Times Square. The area also boasts excellent access to green space – the terminus of the High Line at 34th Street, Hudson River Park to the far west, and Central Park is not too far away for the lucky people who live in the West 50s. There’s the added bonus of being right near Hudson Yards and all its offerings. And if you do want to wander further afield, you’ve got the Upper West Side to your north and Chelsea to the south.